A solo exhibition of New Sculpture and Installation.

Sculptor Caroline has been working on site with local archaeologists DROP (Discover Roman Otford Project) on the dig of a Roman Villa in Otford. The large -scale playful sculptures in Luck & Limen are a response to this experience and include Roman tesserae and oyster shells found in the dig. 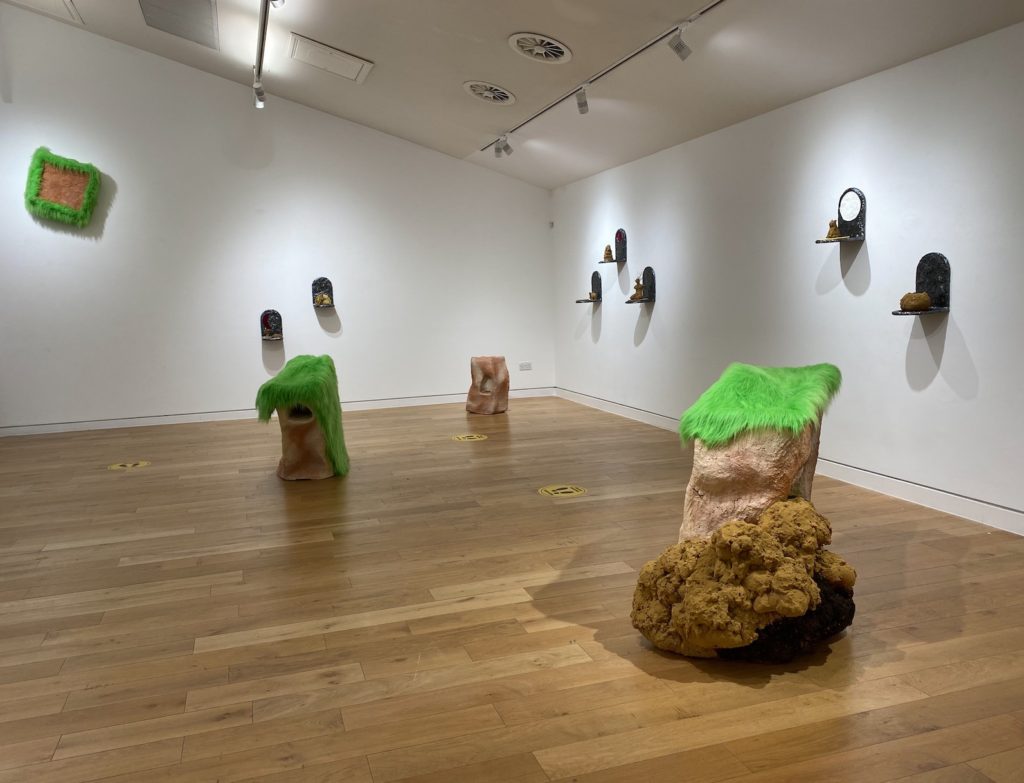 Caroline’s sculptures are material musings on the everyday world. Orange construction netting, the simple act of cooking an egg, and other snippets of reality become the starting point for vibrant and absurd sculptures. Her work develops intuitively through materials and making, often as constellations of sculptures that weave together a narrative and transform whole spaces with their presence. Caroline works across a wide range of ever-changing materials, from paper-pulp to homemade rust, to salt-cured egg yolks. Lately she has been experimenting with cob as a sculptural material. 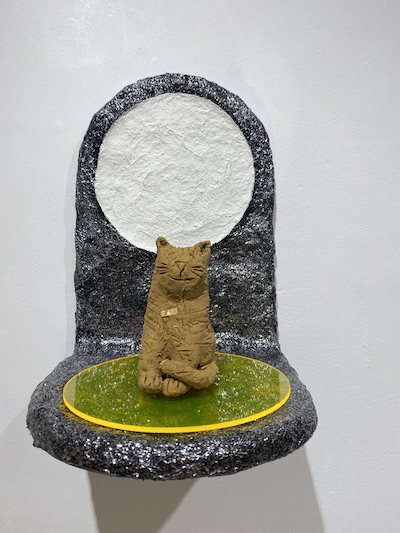 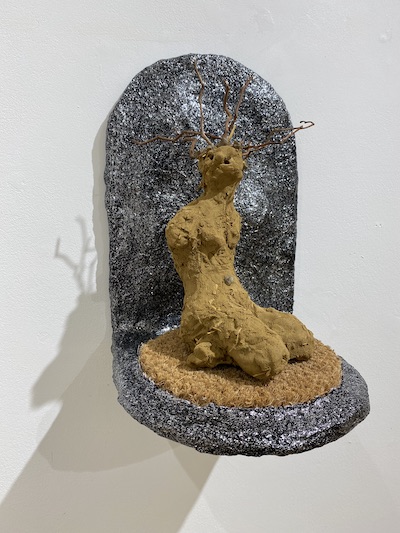 Find your your Cob ZOOM workshop sculptures in the show that you made with Caroline online.
Caroline will be working with a cob sculpting activity in the Gallery on Thursday 3rd and Saturday 5th June 10-2 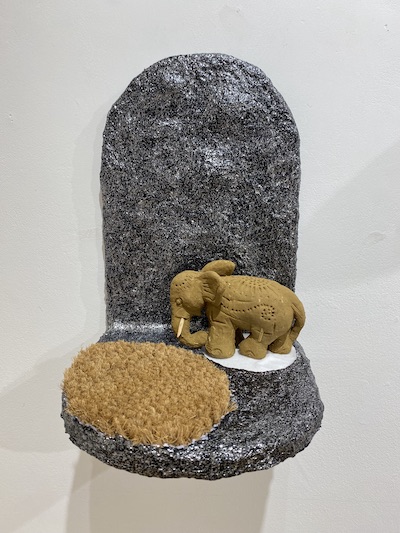 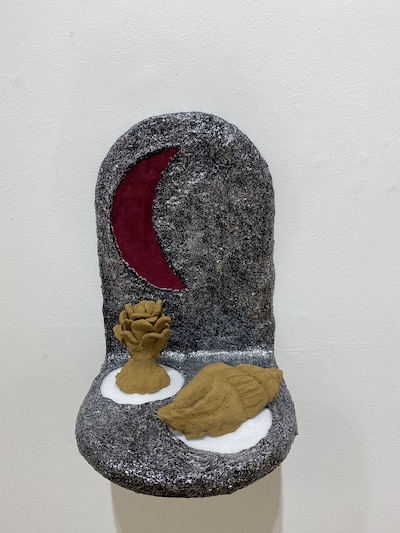 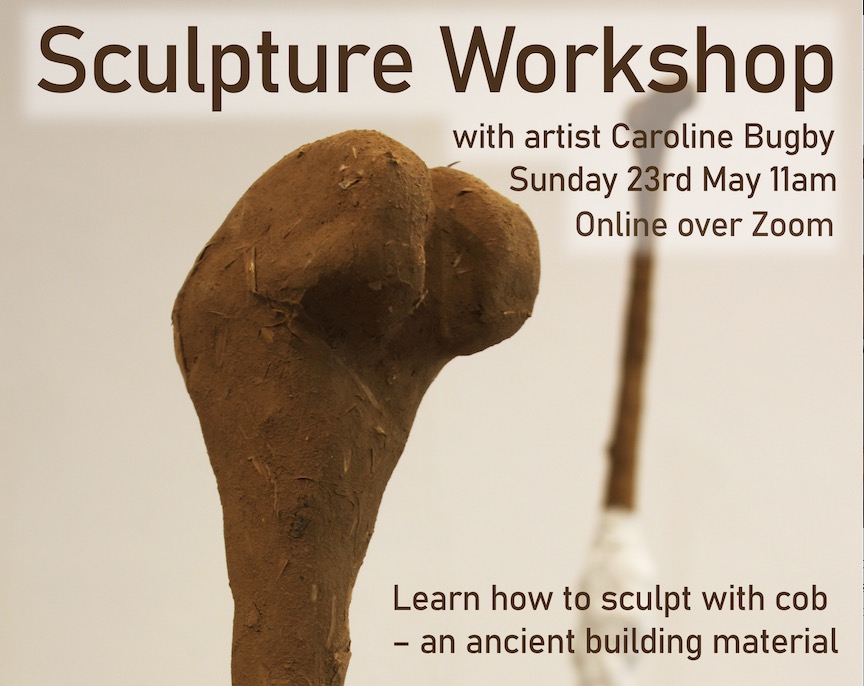 Caroline is teaching a workshop ‘How to sculpt with cob – an ancient building material’ on Sunday May 23rd at 11am online over zoom. Materials are provided free but will need to be collected from the Sevenoaks Library building on Friday May 21st  2 – 4 and Saturday 22nd 10 – 1

This fun and accessible workshop will touch on the history of cob and introduce the basics of sculpting with this mix of natural clay, sand and straw.

This activity is suitable for all ages and abilities! No previous experience is required.

The sculptures you produce will go into Caroline’s exhibition in the Kaleidoscope Gallery. When the exhibition is finished you will be free to take them home again.

Please register your interest for the workshop with Caroline at carolinebugbysculptor@gmail.com 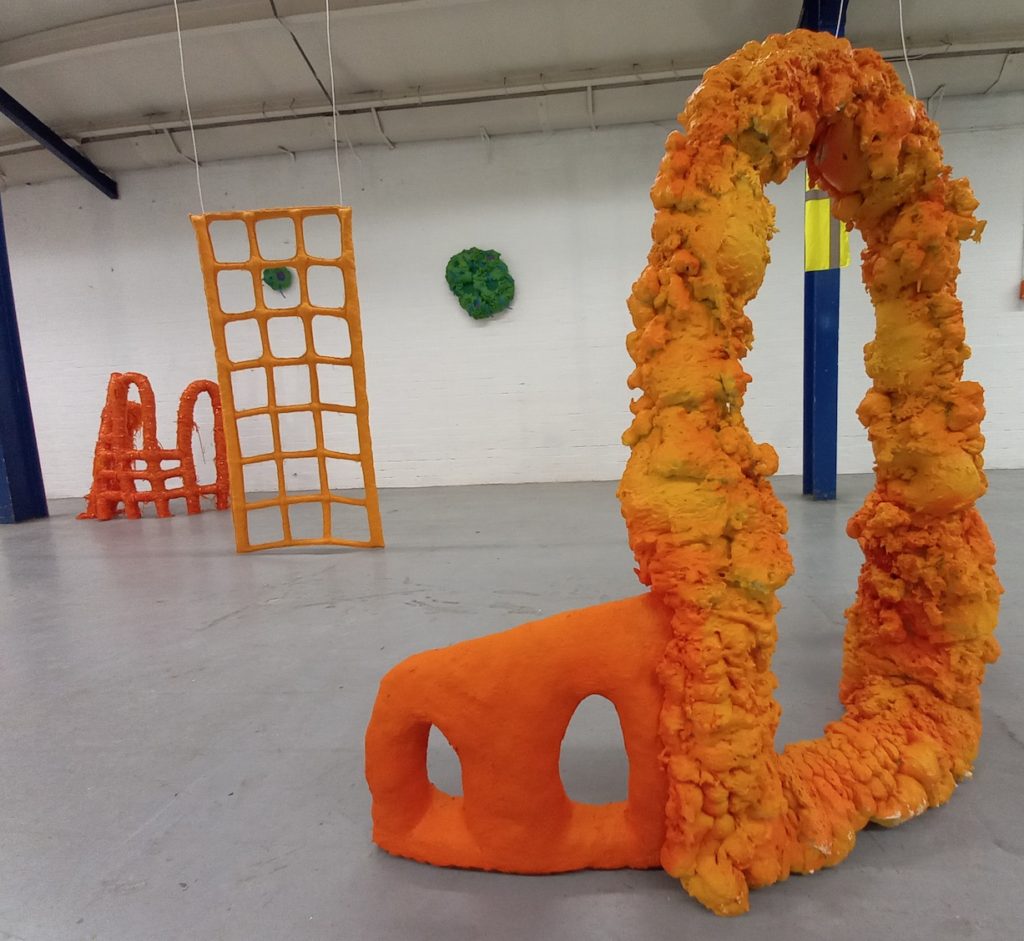 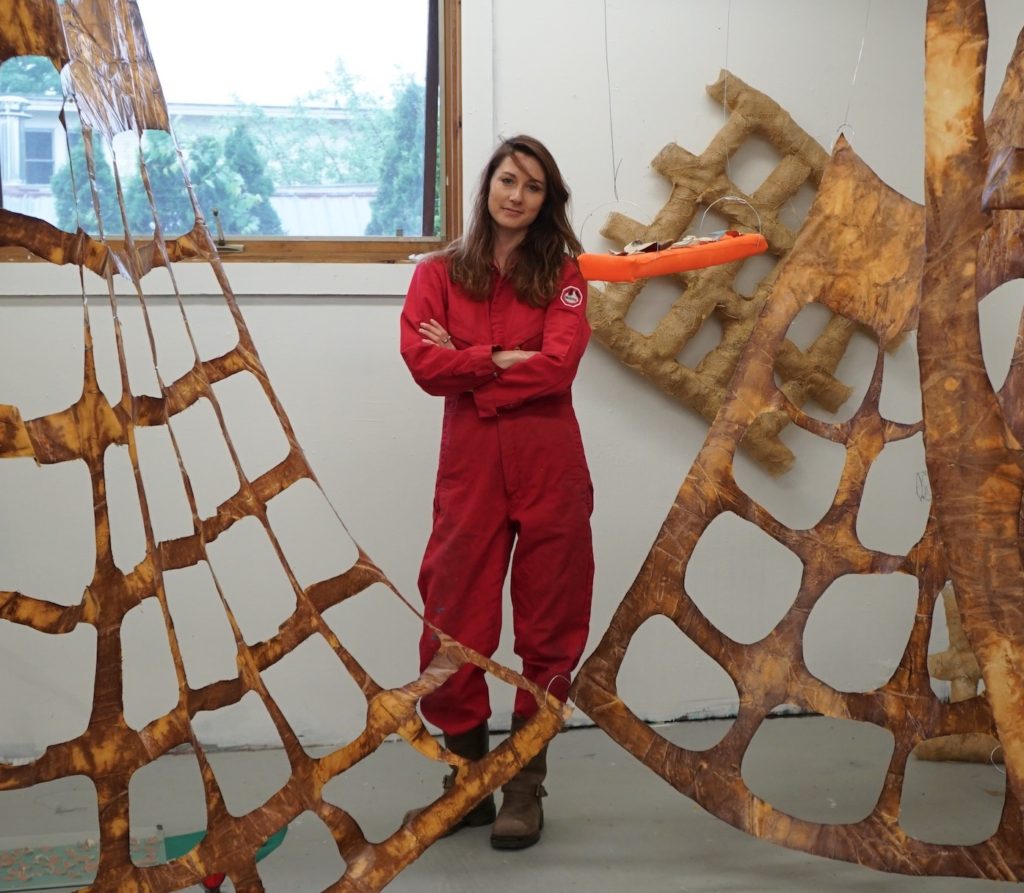 Caroline Bugby is a sculptor and installation artist who works and exhibits in both the USA and the UK. During her year long residency at Tonbridge School, Kent, she is became involved in local archaeology and responds to this in her work. She is also a member of DROP: Discovering Roman Otford Project, a community archaeology team. In 2018 Caroline participated in two residencies, one at the Vermont Studio Center, where she met artist Maureen Jordan with whom she collaborates, and the other in Barcelona.

Caroline has exhibited work in the UK and USA, and has public artwork on permanent display in New York and Vermont.

Alongside her artistic practice, Caroline is also an educator; at the moment she is teaching at secondary school, previously she has lectured at the University of North Carolina at Greensboro and Forsyth Technical Community College, USA. She is also involved in community outreach: in Greensboro, NC she coordinated a free art program for immigrant teens, and currently in the UK she runs art workshops at Hospice in the Weald.

A couple of hundred metres to the northeast of the church in the picturesque Kentish village of Otford, something much older than the surrounding buildings is emerging from beneath the surface of a former hop garden. Church Field Roman villa was discovered in 2012 by geophysical survey, and has turned out to rival its nearest neighbour (the well-known villa at Lullingstone) by being at least twice the size. Discover Roman Otford Project have been working at the site since 2015 to unlock its secrets, and increase our knowledge of the area in Roman times.

Otford appears to have been at the hub of several important trading routes, with access via the river Darent to the Thames, and thence on to London or the continent. The villa reflects this importance in its scale and layout. By April 2021 we had uncovered about a third of the site, and excavated 14 rooms and corridors. From finds on the site we can date the building’s occupation to about 220-400AD.

Several of the rooms had painted wall plaster, some of which appear to depict rural scenes as opposed to just geometric patterns. The floors that remain consist of a hard cement (opus signinum), with traces of red non-decorative mosaic tiles (tesserae) in some of the corridors. At least two ranges of rooms were built around a large courtyard/garden, with a verandah; rather like a medieval cloister. There also appears to have been a small private garden separating the east wing from the main suite of rooms.

This east range contains at least two rooms with an underfloor heating system (hypocaust), and many flue tiles have been found with decorative patterns combed into them to key in wall plaster. One of these heated rooms may have been a winter dining room, as the smaller room adjoining it has a tiled floor and appears to have been a kitchen. The room on the other side of this kitchen is the largest room so far excavated, and was possible an audience chamber, coupled with a summer dining room. Unfortunately the original floor to this room does not exist, but may have contained a decorative mosaic, as it seems to be the only floor surface that has been completely removed.

So far we have found 2-3 possible kitchens, one of which contained several bucket loads of oyster shells, which were obviously a particular favourite part of the diet. Pork, mutton and beef were also regular meals. The pottery that these were served on came from a number of sources, including Cambridgeshire, Oxfordshire, the north of Britain and Gaul (France). In the yard outside one of the kitchens we found sherds of a ‘hunting cup’, a beaker with a relief scene of a hare being hunted by hounds. This was probably manufactured in the Nene Valley, in Cambridgeshire. A complete cup of this type was found over the other side of Otford during excavation of a Roman cemetery.

Items of everyday life have also been found, including a pair of shears that would possibly have been used to trim the beard of the master of the house. Some beads and bone hairpins that his wife may have worn have also come to light. The working life of the villa has also made itself known, in the form of a bone stylus, which may have been used by the estate manager to write the accounts on wax tablets. We have a steelyard weight, probably for weighing produce, and some pieces of antler, which may have been used for knife handles.

There is likely to have been a bath house – which may now be underneath a 20th century tennis court. This would have been fed from springs about 50 metres to the north of the villa, and would have drained out into a marshy area that is now a large pond in the garden of a nearby house. This whole area was remodelled when the Archbishop’s palace was built in the 16th century, and the springs that fed the Roman villa were channelled to flow through the palace gardens.

At some point the building appears to have fallen upon hard times, and one of the rooms with the painted wall plaster had a large bread oven placed inside it. Corridor floors fell into disrepair, and had old roof tiles inserted into gaps in the tesserae. Eventually, probably at the end of the 3rd century, the villa was dismantled, and everything usable removed, leaving just hardcore. Within a couple of years of demolition, all traces of the building would have vanished.